In the context of Africa’s Big 5 and perhaps some of the best wildlife safari experiences on the Planet, I present you with the Greater Kruger National Park. Learn more about what lodges we believe have the best game viewing in this area of South Africa.

Robin is going to give us a unique insight into his journey as a young, budding wildlife photographer in pursuit of his dream job. These aspirations led him to the Greater Kruger area, a few hours drive from his front door and into the heart of the bush. This world renowned location has some hidden secrets of which we hope to reveal, with first hand knowledge from someone who has worked in the many lodges within this wildlife zone. First, we get to know his story and hope to better understand this dream of harmony with wildlife and tourism alike. Its the key to ensure the protection of this and other wildlife sanctuaries. 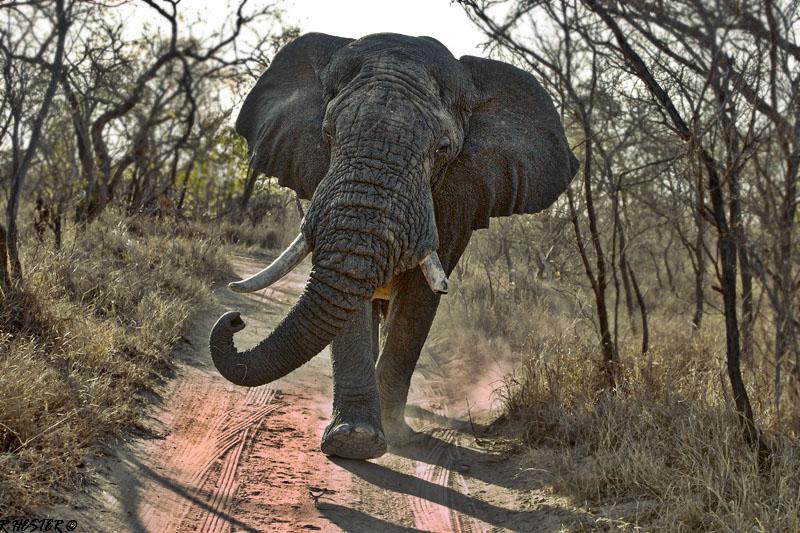 I grew up in Johannesburg, South Africa. My story with the African bush started at a young age. All our family holidays were to the Kruger National Park. In 1992, my father bought a small piece of property very close to the Kruger. This area gave me the opportunity to view the Big 5 and more. Therefore, as you can imagine, I spent every long weekend and school holiday there, in our old farmhouse. It was here in this small haven, that my passion for Wildlife was ignited.

I learned how to drive an old series 2 Land Rover as an adolescent and started to go on mini game drives by myself. This is how I started viewing a pride called the Monwana pride headed by a very large male lion called Mododa, who I started calling Bubezi. You could say the first time Bubezi roared next to our open game viewing vehicle, began the start of my fixation on wildlife and the big cats. I recall in 2002, I purchased my first little digital camera, this led to an incredible journey to follow and capture my passion and spending as much time in the bush as possible observing animals.

The Legend Bubezi. He gave me endless hours of incredible viewing. I recall so many fond memories. He too became a legend with my peers.

Bubezi, displaying his age and scar battles in this picture. 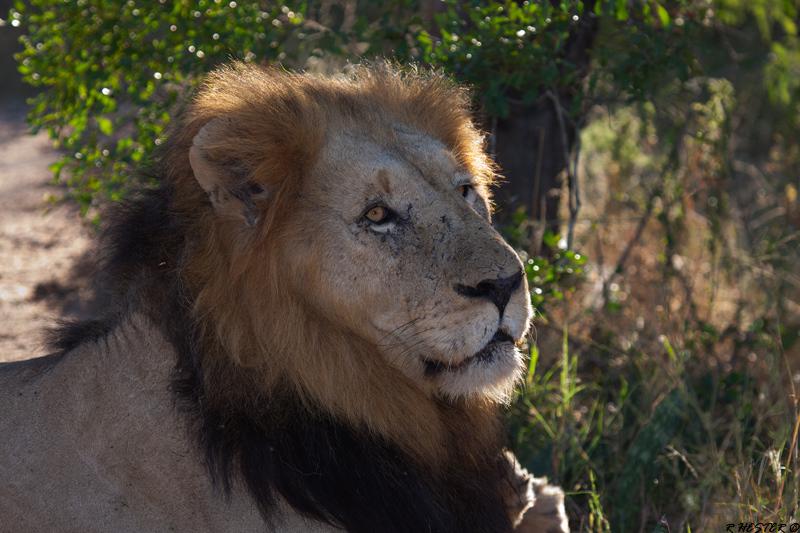 Leopard viewing was always very difficult on the farm due to the high Lion density. This large male Leopard “Bamba Inyati” had a territory that overlapped very close to our farm house. He further grew my fascination for Leopards. His name means Buffalo kill, as the first time he was viewed, was on a young buffalo carcass. Something not often seen 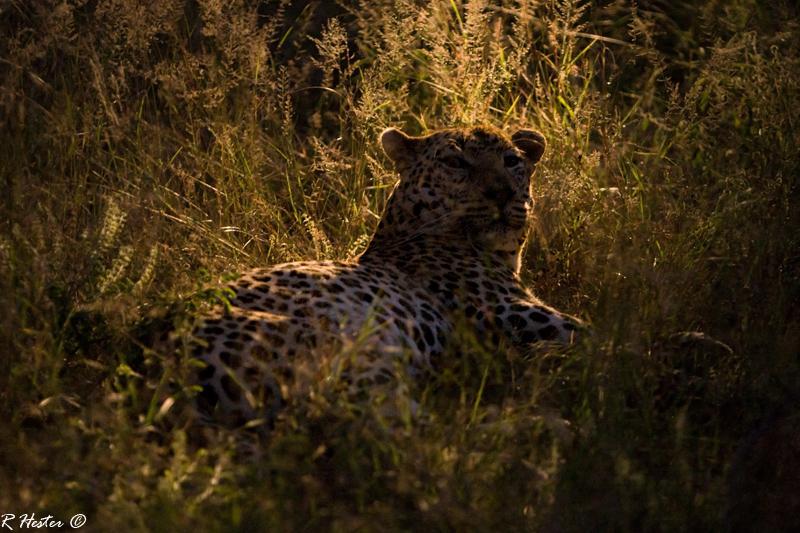 The more time I spent with these animals, the more I craved to photograph Africa’s iconic species. It was always a lifelong dream to be a guide so I decided to get my FGASA qualification and start guiding. Subsequently, I was fortunate enough to get an interview with Mala Mala Game Reserve and as they say, the rest is history.

We asked Rob to share some of the valuable secrets that can enhance your safari experience:

How enriching do you believe a guided safari can be?

A safari is only as good as the safari guide. To safeguard yourself around this, express your concern to the lodge you are going to be staying at or hire a private guide to host you whilst on the safari. A good guide will know how to enhance your overall safari experience. It is not just about viewing animals, it is about when to view specific animals, passing on interesting and valuable knowledge to the guests, managing the guests’ expectations, parking the vehicle at the correct angles, forming a friendship with the guests whilst maintaining the professionalism needed. All of this creates an enrichment experience.

Having so many years of experience, what would you say to someone who may be doing their first safari?

Take everything in; as you get home, you will be planning your next safari. There are so many incredible safari destinations to go to. Find a travel agent who specialises in safari destinations and discuss lodge options that fit your budget. Factors that must be discussed include, which time of year is best for safaris and do your own research on potential lodges that you may be staying at.

If you are lodge hopping, try stay at a lodge for a minimum of three nights. This provides the guide with enough time to try and show you, the animals you want to see and also eliminating the rush to be transported from one lodge to the next, thus allowing sufficient time to truly experience the atmosphere of each lodge. On the day of departure try and arrange your transfer to be after your morning game drive.

Aside from the cameras and video equipment, pack a pair of good binoculars. Binoculars allow you to take in vast amount of detail and as such you will not only utilise them on games drives but you can use them while you are at the lodge, sitting and relaxing at your deck in between game drives. In addition, pack a hat, sunblock, sunglasses and a good jacket.

Where do you believe the best places to photograph wildlife in South Africa?

In my opinion, the best places to photograph wildlife in South Africa are some of the reserves that form part of the Greater Kruger National Park. In no particular order, the four that stand out for me are Mala Mala Game Reserve, Sabi Sands Game Reserve, Timbavati Game Reserve and Manyelethi Game Reserve.

Timbavati Game Reserve is about 53 000 hectares which borders the Kruger National park and Klaserie Game Reserve. Parts of the reserve have a large Mopani belt of trees and beautiful drainage lines. Nestled in the reserve are numerous lodges, varying from self-catering or 3 to 5-star lodges.

Sabi Sands Game Reserve is roughly 65 000 hectares which also borders the Kruger National Park. I have been very fortunate to spend a lot of time in the Sabi Sands and game viewing throughout the different lodges is always incredible. Many of the lodges will have access to portions of the Sand River, which flows throughout the whole reserve.

Manyelethi Game Reserve is a community-owned property. Perfectly positioned between the Timbavati Game Reserve to its North, Kruger National Park to its East and Northern Sabi Sands to its South. Its about 23 000 hectares in size. I was very impressed with the game viewing there, especially the Lion viewing. It is located on a very beautiful scenic part of the Lowveld and the vegetation there is quite open in most areas.

Mala Mala Private Game Reserve lies within the boundaries of the Sabi Sands Game Reserve. Mala Mala shares a 19 km (12 miles) unfenced border with the Kruger National Park. If I had to choose my favourite place, although I am somewhat biased in my answer, it would be Mala Mala Game Reserve. What makes Mala Mala so special to me is that it has access to 22 kms of the Sand River that flows right through the reserve.

The Eastern bank, which is the main traversing area within Mala Mala, has no lodges or power lines on it; just an incredible road network through its diverse bushveld consisting of rocky outcrops, vast open areas, the most remarkable riverine trees and four large tributaries (dry river beds) which all lead to the Sand River. All of this creates an incredible habitat and ecosystem for the diverse wildlife we have in South Africa.

Those are my top four areas in South Africa with numerous lodges housed within them. There are also great Malaria free areas which produce excellent game viewing such as Madikwe Game Reserve and the Kalahari.

Tell us about an exciting moment from your time as a guide?

It is a very difficult question to answers. Whilst guiding you sometimes witness raw nature that you only see in National Geographic documentaries. One of my dreams was to always be able to view and spend time with large male lion coalitions, and I was privileged to see parts of these form. These included the Mighty Mopogo who ruled the whole Sabi Sands and the Manyelethi Males who ended the Mopogo’s reign; the Matimbas who ruled North of the Manyelethi Males; the Selati Males who’s reign was very short-lived in the Western Sabi Sands; and the Matshipiri Males who ruled Northern Mala Mala for a short while and now the Gowrie males who currently control the Northern Sabi Sands and Northern Mala Mala Game Reserve. Being able to see these mighty warriors in the flesh, have formed memories that will be with me forever.

If I had to choose a particular sighting that really stands out for me, it would be watching the Eyrefield pride take down a Buffalo cow. The adrenaline rush one gets from watching Lions vs Buffalos, is one not easily forgotten. The scene was as if it was set in a thriller movie. A static storm was brewing to the West with incredible sounds of thunder and a spectacular show of lightning. The wind was swirling in all different directions. This allowed the Eyrefield pride to pick up the scent of a large Buffalo herd. They were about a kilometre East of their position. Two guides and I, could see what was going to happen and we continued to follow the Eyrefield pride through the thick bush. 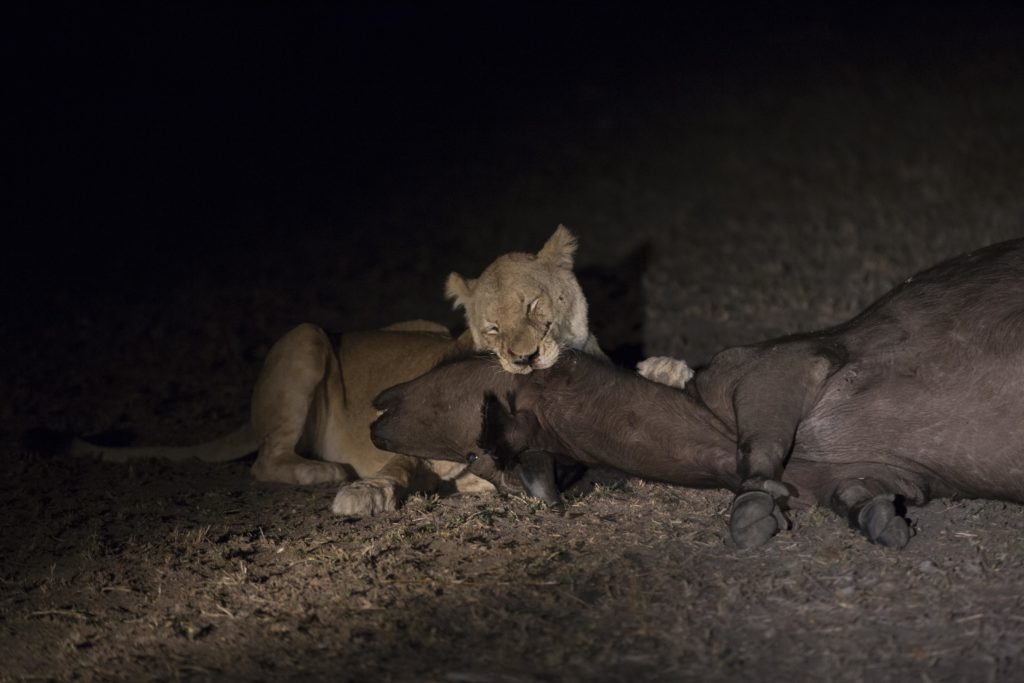 The Buffalo herd had settled in a large open area for the evening. The show was about to begin when the two lionesses left the two cubs behind. They headed in the direction of the herd. They ambushed the them and there was a continuous back and forth between the prey and predator. The thunder and lighting only added to the dramatic scene and eventually the Lionesses managed to single out a Buffalo cow and take her down. 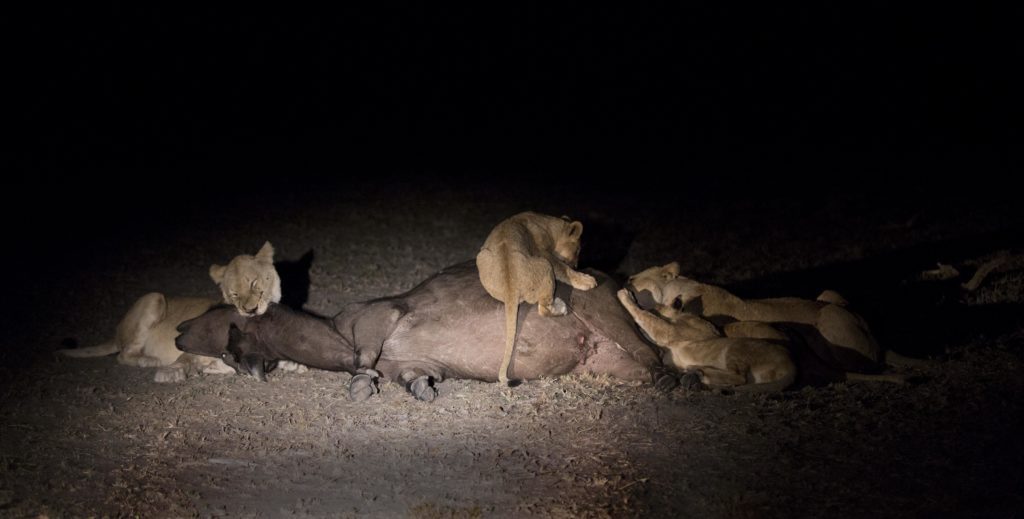 The cubs came shortly after to reap the rewards of the kill. Amongst all the chaos, the Matshipiri Males must have heard what was going on. They came walking down the road roaring to let everyone know of their impending arrival.

The Matshipiri Males walking into the area, backlit by spotlight. 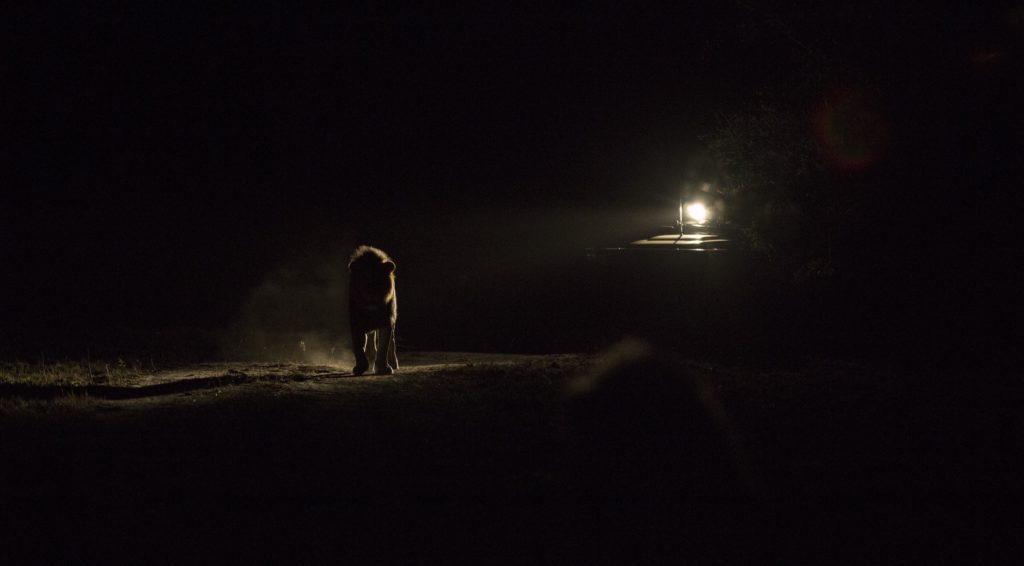 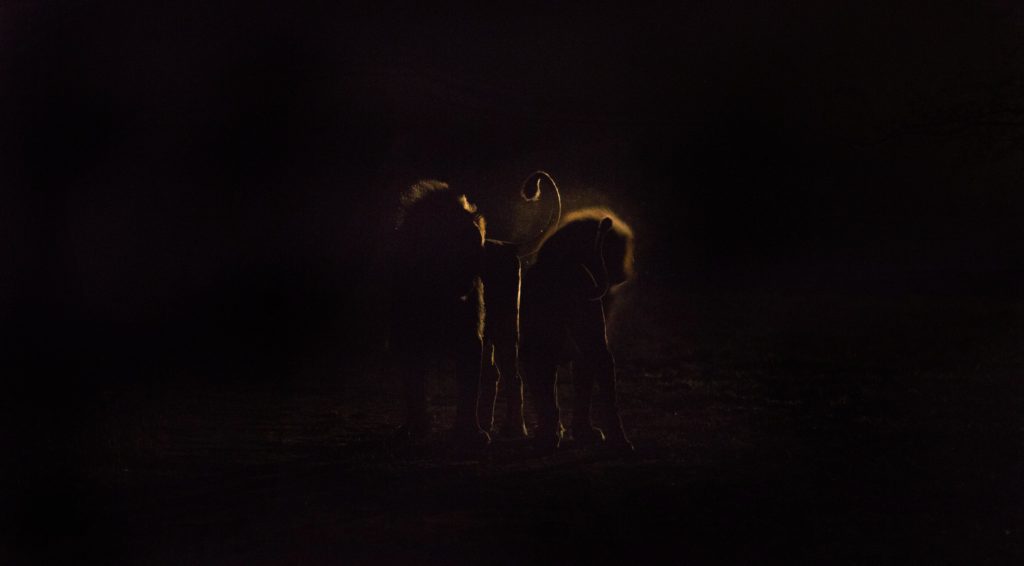 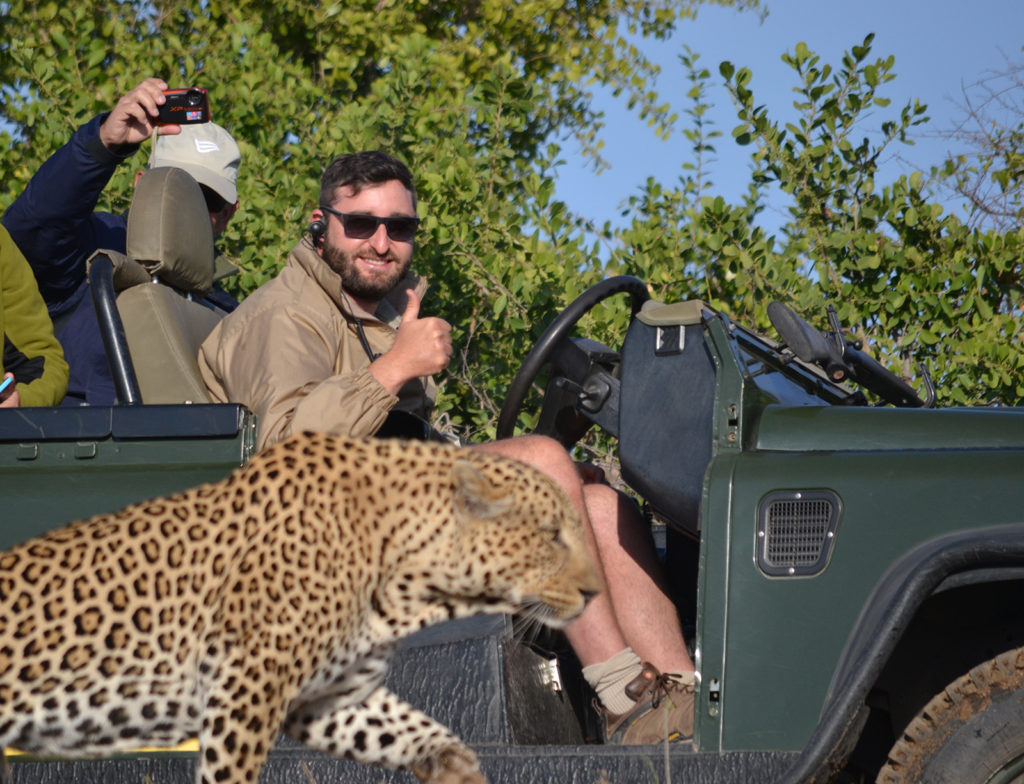 Thank you Rob for sharing your story.

Want to find out how Rob captures his amazing images? Head to our Blog on Capturing that Perfect Wildlife image! Coming soon…