“It’s not whether animals will survive, its’s whether man has the will to save them”,

A rush of excitement as a smooth silk sun ray brakes over the stripped orange and black coat a Tigress. Her elegance and beauty beyond description. A female in her prime moving with strength and purpose. Unlike most male big cats she is either pregnant or is looking after a litter. The hunger is primal and she will not stop until she has found a meal.

India is the heart of the wild Tiger population. Within 40 National Parks there are estimated to be around 1400 Bengal Tigers. It is truly a privilege to see one. Simply spotting one is difficult. Without expert guides and the help of all the other guides you would be lucky to see one. There are a few places where we believe you will have the best chance at seeing one of these amazing big cats but here are our top 3. 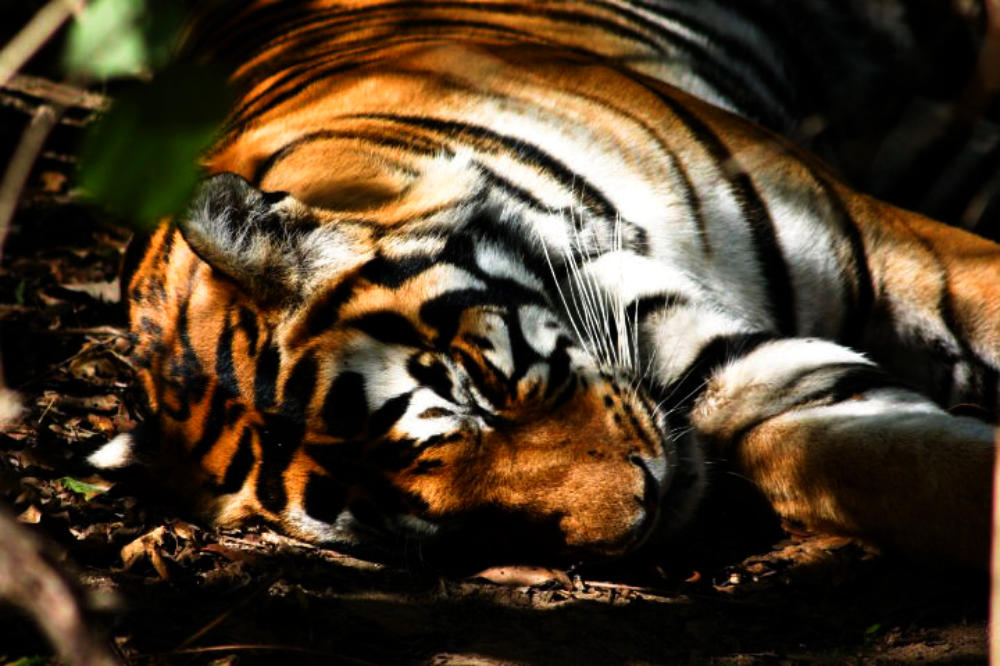 Bandhavgarh National Park is situated in Madhya Pradesh. The park has one of Indias highest populations of Tiger. Within the core area of the park which is about 100 square kilometres there are estimated to be 50 Tigers. This area is steeped in rich Maharaja History. Tales of white Tigers were whispered in the wind. The area has a very special feeling about it. The park is also home to chital deer, sambar deer, barking deer, wild boar, nilgai antelope, four-horned antelope, Indian Bison, wild dog, leopard, blue bull, Indian fox and bear. If you get a chance head go to the Bandhavgarh Fort which is perched atop a 600-meter-high cliff overlooking the Vidhyan Mountains.

The National Park is open from October to June and some of the best Tiger viewing is from April to June. These tend to be some of the driest times of the year. Meaning that most of the animal concentration is around the water holes which in turn attracts the Tigers.

The closest Airport is Jabalpur Airport which is 197 kilometers away, about four hours by car.

Rathambore is one of Indias largest National Parks. This park was once ruled by the Maharajas and hunting only stopped in 1973. This ethereal park is dotted with ancient ruins of a by gone era. It covers 392 km² and it is situated in Sawai Madhopur district in southern east of Rajasthan. Within the reserve you have two rivers Banas and Chambal. It is a very popular destination for wildlife photographers trying to capture that magical image of a Tiger or Leopard walking amongst the ruins. There is also other wildlife such as jungle cats, sloth bears, hyenas, Indian foxes, jackals and crocodiles.

Like most National Parks it is open from October to June. The best times to see Tigers is April but it is very pleasant from February onwards. The winters are cold and the summers are very very hot. So bear that in mind if you will be traveling during those times.

Tip: The park has three lakes, Padam Talao, Raj Talao and Milak Talao, where wildlife tends to congregate. Although not always the case Tigresses and cubs are can be spotted in the Bakaula area, which has dense forest cover and small watering holes. There are ideal places for the mothers to hide there youngsters.

The closest airport is Jaipur located 130 kilometers away and a transfer by vehicle will probably take you about 3 hours. 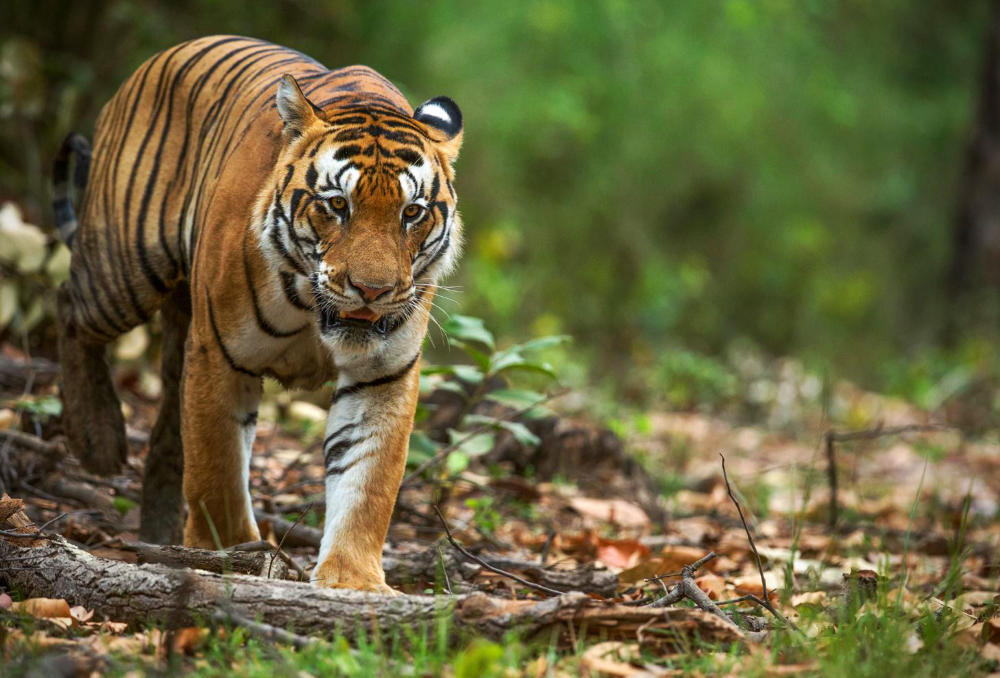 This is a very beautiful Park and the Tigers that roam here are brethren of Shere Khan. Coming into a large open meadows within give you amazing views of these and other wildlife. Kanha is also home to the hard-ground barasingha, an endangered species of deer only found here. Other animals regularly sighted include chital, gaur, three-striped palm squirrel, common langur, jackal, wild pig, black buck, mouse deer, chinkara, and sambar. If you are lucky you may have the opportunity to see striped hyena, leopard, porcupine and ant-eating pangolin. Although very rare.

Mukki entrance does have fewer tourists, at least what we found. But like all these parks they are fairly busy. The park is open from October to June and the best time to see Tigers is April to June. Again this is due to the lack of rain which means most of the animals concentrate around the water sources.

The closet airport is Jabalpur Airport is 175 kilometers away, about 3.5 hours by car. 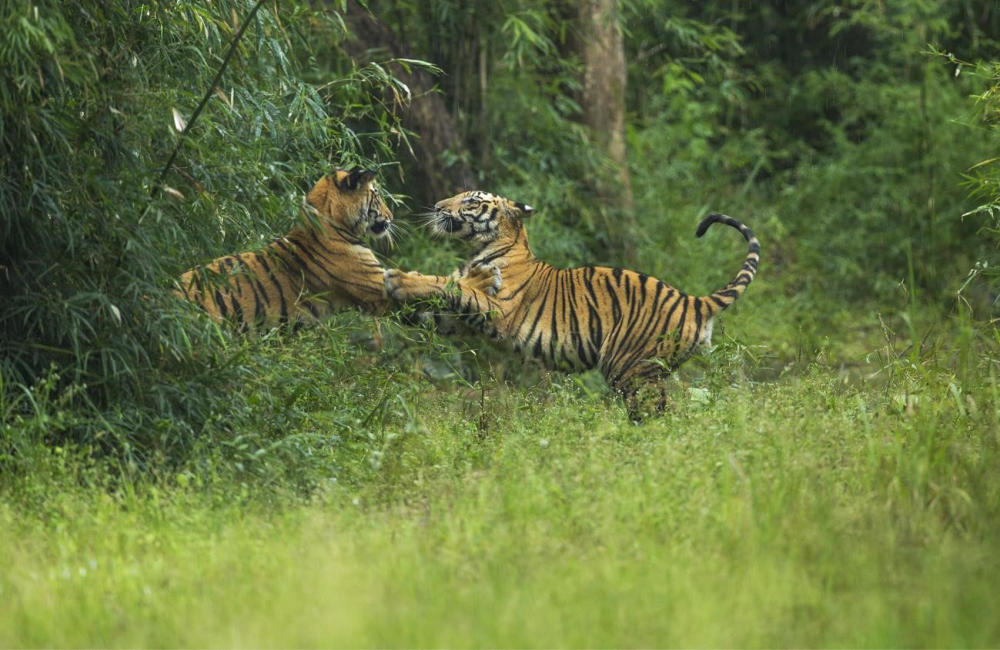 One of the more low profile parks to visit in central India. The park has some areas which are heavily forested giving the animals some much needed refuge. It does make it fairly difficult to see Tigers. The reason why we include it here is because it has very good sightings of Sloth Bear. It is also much quieter as vehicle numbers are limited. The sense of adventure continues right from the start when you cross the Denwa River by boat to get picked up by your guide and diver.

Some of the lodges also offer evening drives in the buffer zone of the park which increase your chances of seeing more wildlife. The park is also home to hyena, gaur, sambar, chital, barking deer, chin Kara, mouse deer, wild boars, wild dogs, black bucks, foxes, porcupines and flying squirrel. It is also the only park that offers walking safaris. These are also conducted in the buffer zone. Don’t let that fool you as the wildlife are free to roam here too.

The best times for wildlife viewing is again from April to June but can also be visited from October to March. The closest airport is Bhopal which is 135 kilometers away, about three hours by car.