If all else fails, at least be moved by nature – Africa’s best Safari.

We have had the wonderful opportunity to experience amazing wildlife that calls this wonderful planet home. Searching the Himalayas for Snow leopard, Trekking in the Komodo National Park to find the ancient dragons and our closet primate relatives in the Borneo Rainforest. What we have realised even more so than before is that these places are becoming smaller and smaller. The vast tracks of wild are simply no longer there.

While we believe in eco-tourism and stand proudly by our ethos here at CM Travels, we thought we would show you what something like that actually looks like on the ground.

Featured here this month on CM Travels we bring you Adam Parker and Mike Lentz. With many years of working within the Safari industry these conservationists will be taking us into their world of guiding. Managing and taking guests out into the Wilds of Africa. Between them they have walked over 15 000 hours in the bush. Driven for what would easily equate to many years in the bush, amongst some of the most wonderful wildlife Africa has to offer. Importantly they have taken part in the preservation of Wildlife through the camps and lodges they have worked at.

They have each kindly agreed to share their first hand knowledge of the amazing places that they have worked and how each has helped preserve the unique wildlife that call it home. From the humid jungles of The Republic of Congo to the rolling plains of East Africa. 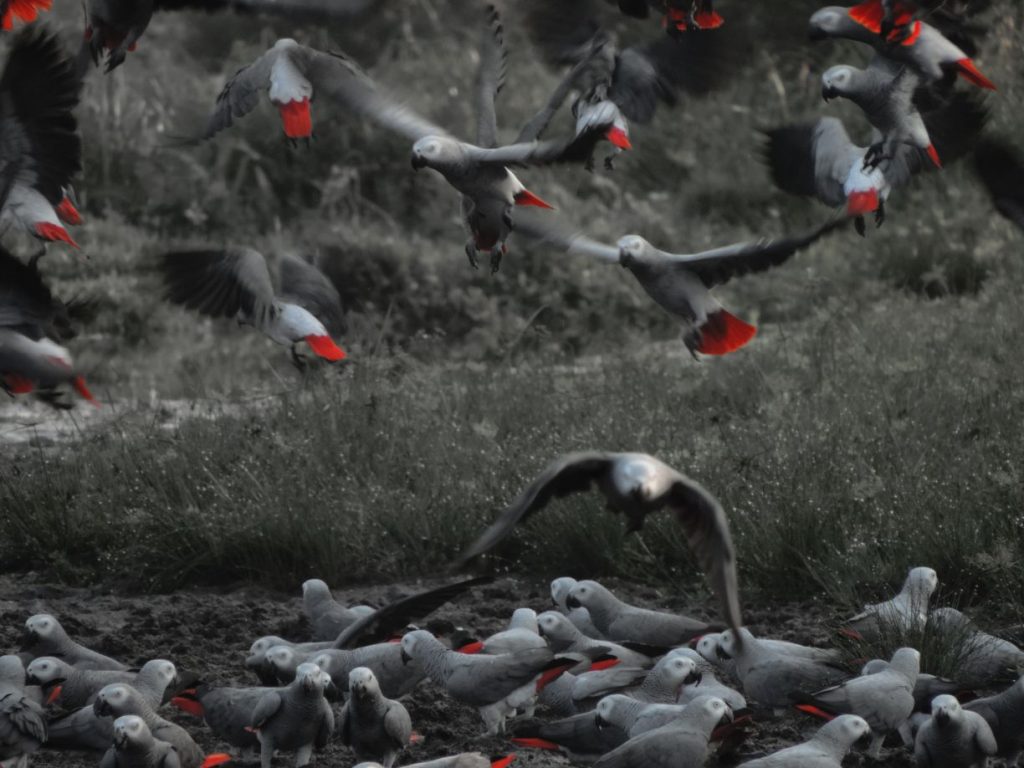 To me, the elephant is symbolic of Africa. It’s an extremely intelligent animal. Their emotional intelligence hints at the complex social structure within the herd, and the bonds that form between individuals. They will feel anger, stress, grief, and are the only other mammal besides humans that secretes tears. 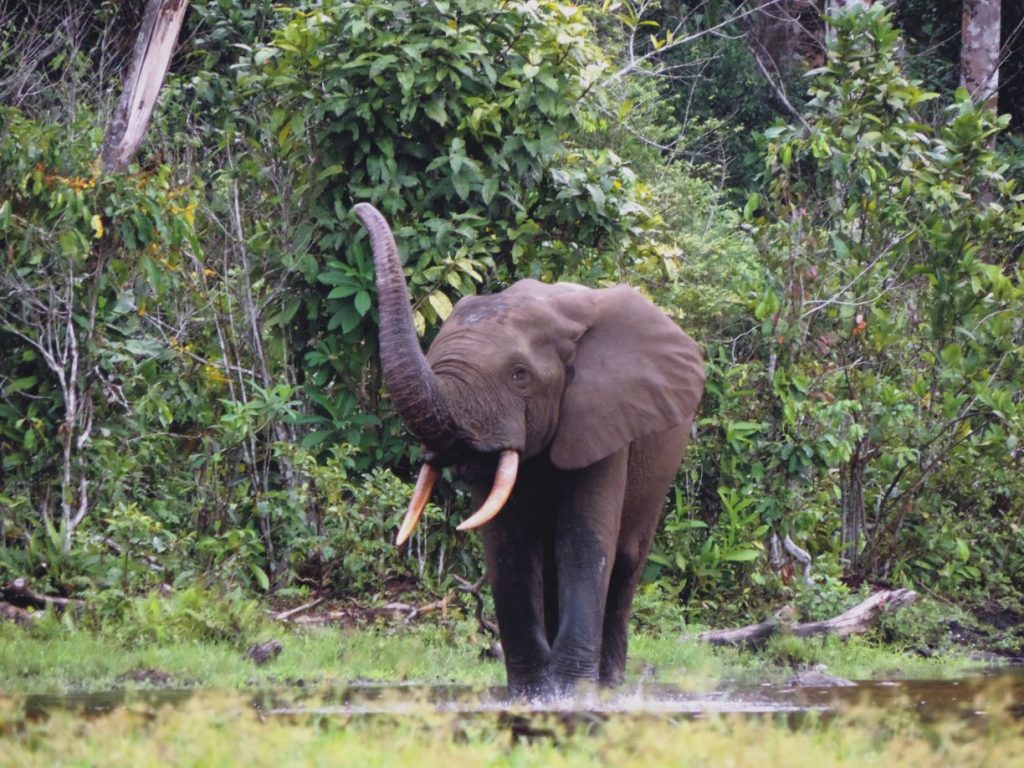 This young man has had the wonderful opportunity to work and par take in the conversation of the rainforests of The Republic of Congo. Odzala-Kokoua National Park in Congo’s remote north-west is one of Africa’s oldest national parks, having been proclaimed by the French administration in 1935. It is some 13 600 square kilometres (1 360 million hectares) of pristine rainforest and is an integral part of both the Congo Basin and the TRIDOM Transfrontier Park overlapping Gabon, Congo and Cameroon.

Nestled in forests, rivers, marshes and swamps is a fantastic array of biodiversity. The Park receives some 1 500 mm of rain annually, mainly during the two wet seasons. Permanent rivers are a primary feature, with the Lekoli and Kokoua rivers flowing into the Park’s major channel, the Mambili. In some places, the Mambili is up to 100 metres wide between densely forested banks; it then flows into the great Congo Basin. 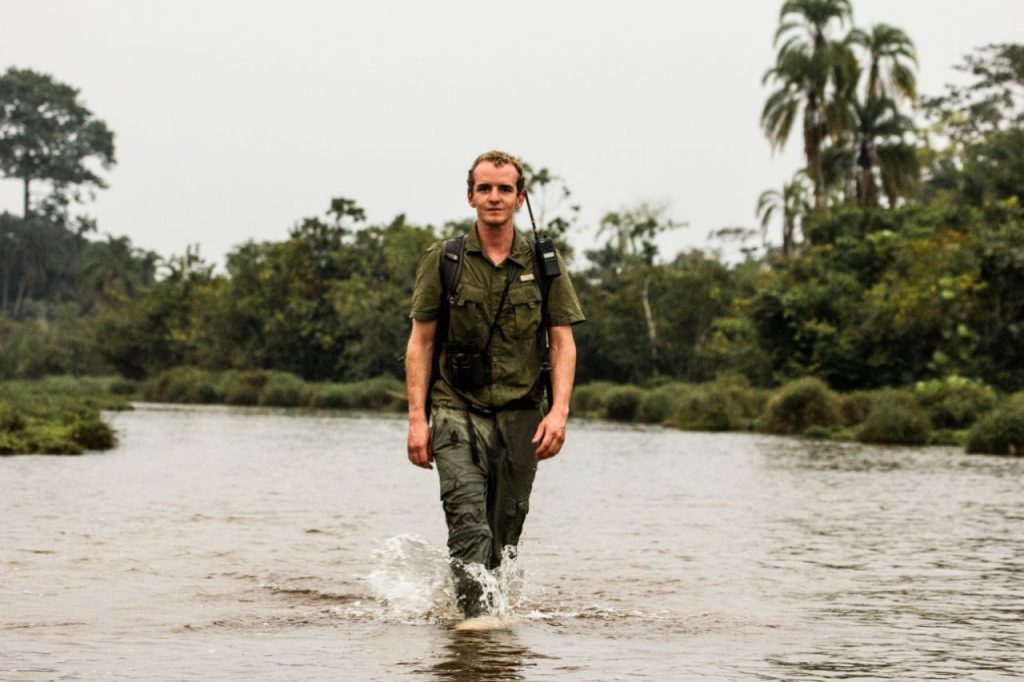 “Recently I have been living in the republic of Congo, probably one of the last wild frontiers in Africa. We stay in wood and canvas huts in the middle of the rainforest. It’s remote but inspiring. At night you can hear herds of forest elephants trumpeting in the darkness, a sound that is hard to explain. It makes you sit up straight in bed”, Says Adam.

Adam shares the same ethos of achieving sustainable tourism for the preservation of these last wild and remote areas: “It was only later that I realised I had an opportunity to really contribute. Once I realised this I started to put all my efforts into conservation, finally landing in the Republic of Congo to help develop conservation and tourism here. It’s a francophone country, which adds an extra challenge for me. Growing up in South Africa I learnt English, Afrikaans, and Zulu in school, none of which prepared me for having to work in West Africa! I have been lucky to have had many great mentors throughout my early days in the conservation game, and I realise now there’s so much to learn and so much still to achieve that I’m probably in it for life.”

The unique Discovery Camps set up hold the three pillars when it comes to the protection of these areas. Conservation, Research and Eco Tourism. In collaboration with Dr. Magda Beremejo and German Illera, Ngaga Camp has become one of Africa’s most important gorilla trekking destinations. They have been studying western lowland gorillas in northern Congo for over 15 years now – without this research there would be no habituated gorillas and no guest experience on which to base an eco-tourism venture.

They are perfectly located to allow Magda and Germán to investigate the human-gorilla interface and the potential for human-wildlife conflict. The habitat overlap between gorillas and the smaller central chimpanzees provides an ideal opportunity to look at competition, resource sharing and other interaction between the two ape species. In other words Ngaga also provides a unique opportunity to assess the effects of gorilla tourism on broader gorilla conservation efforts in Congo and beyond. 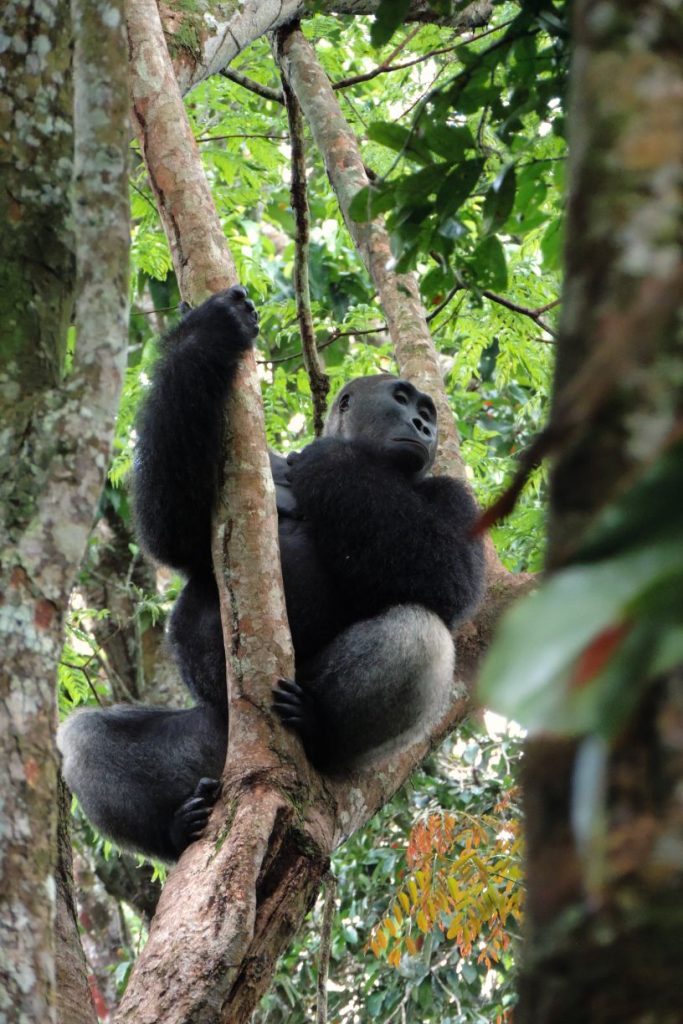 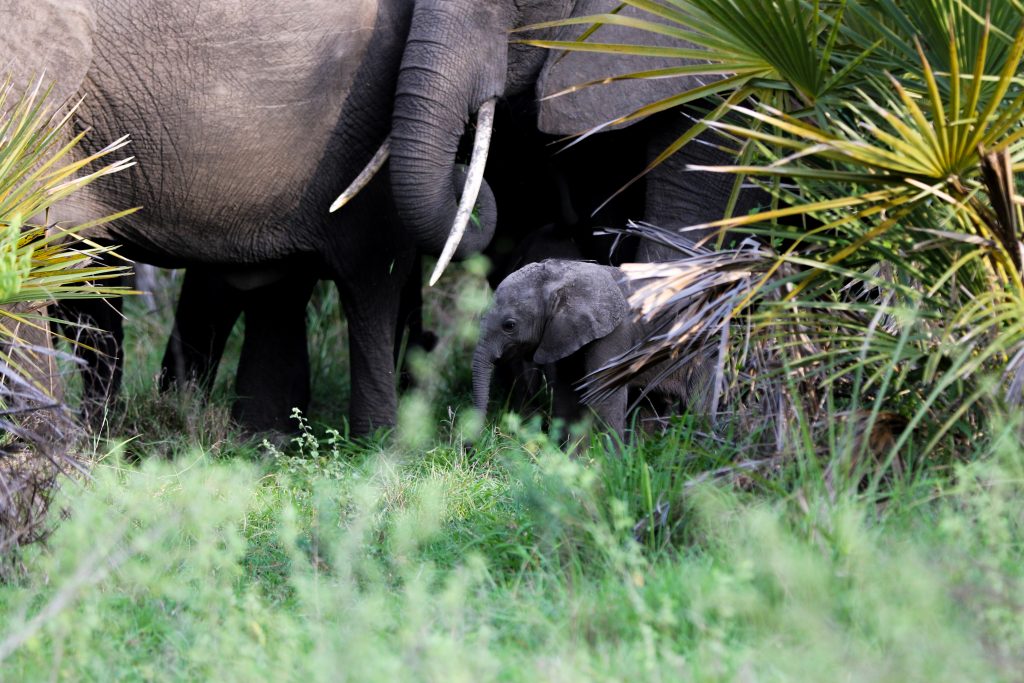 Did you know that Kruger National Park has over 1.5 Million visitors per annum?

Well the Selous had 2000. “I believe I saw two vehicles in the space of 3 months while I freelanced as a guide and manager in the Selous. During my time their we saw very little in terms of people. There are a few lodges and of course there are certain hotspots for the wildlife especially for the predators which tend to concentrate in open areas where there is better grazing for general game like Buffalo, Zebra, Wildebeest and Impala,” says Mike. 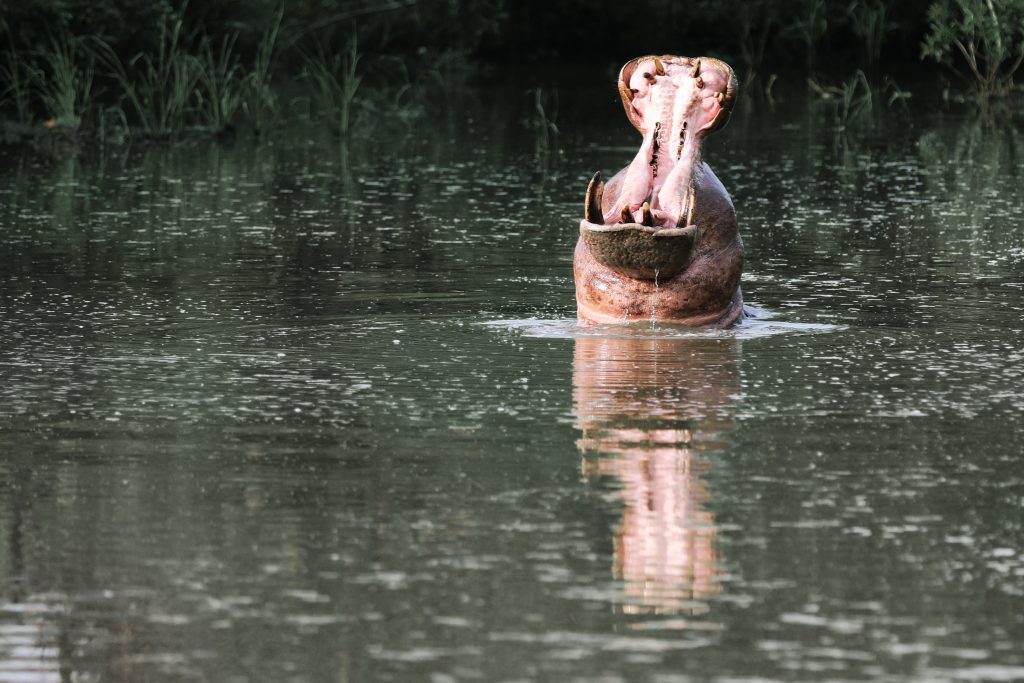 Mike grew up on a farm in the Eastern Cape of South Africa and recalls his first hunting experience when we was 9.”My dad told me that I could shoot 1 springbok”, “I left with our tracker and soon enough we came across a mixed herd of Impala and springbok”, “I was so excited that I remember shacking as I looked down the barrel”, “In the end it was a clean shot and the animal dropped without even disturbing the rest of the herd”, he recalls.

Mike spent his youth walking in the bush of the Eastern Cape before turning to guiding where he later took up a career in walking safaris. I had the pleasure of working with Mike in the Sabi Sands and there are few rangers I have felt safer with. His knowledge and passion of the environment showing with every step. He took every opportunity to get off the “noisy” vehicle and allow your senses to breath, touch and smell the bush. 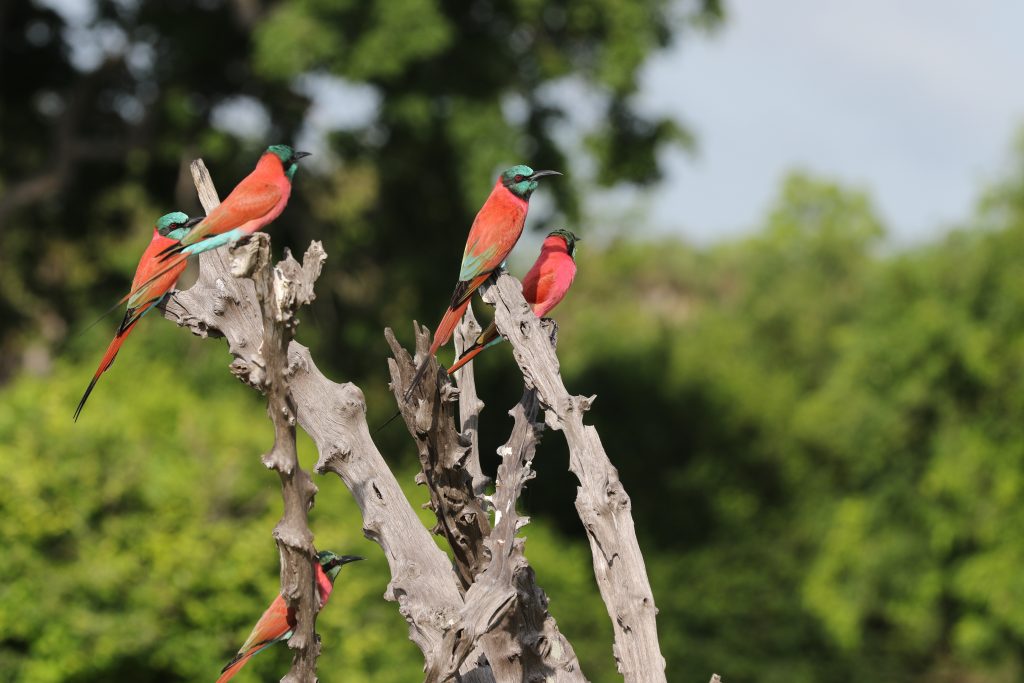 “While the reserve contains many different habitats and so different species, there is a certain concentration of game along the plains down towards the Rufiji River”, tells Mike. “Lake Tagalala contains a huge concentration of Nile Crocodile and Hippo. An ancient ox bow lake from the main channel. The hillsides contain the wonderful Eland and the rare Black Rhino. Difficult to navigate and finding other wildlife is hard due to vegetation. We were very lucky as we often drove out and had Lions or Cape hunting Dogs (African Painted Wolves) on our runway right outside our camp”, Mike admits.

The best thing about the reserve is the intimacy of the game viewing experience. With less people you never feel like you are crowded. Never have to wait for sightings or have to leave when your “time is up”. This all leads to a more personal wildlife experience. We would always recommend seeing the Great Migration. If you are someone who is looking for something off the beaten track, quieter and a different experience then we could not recommend the Selous more. 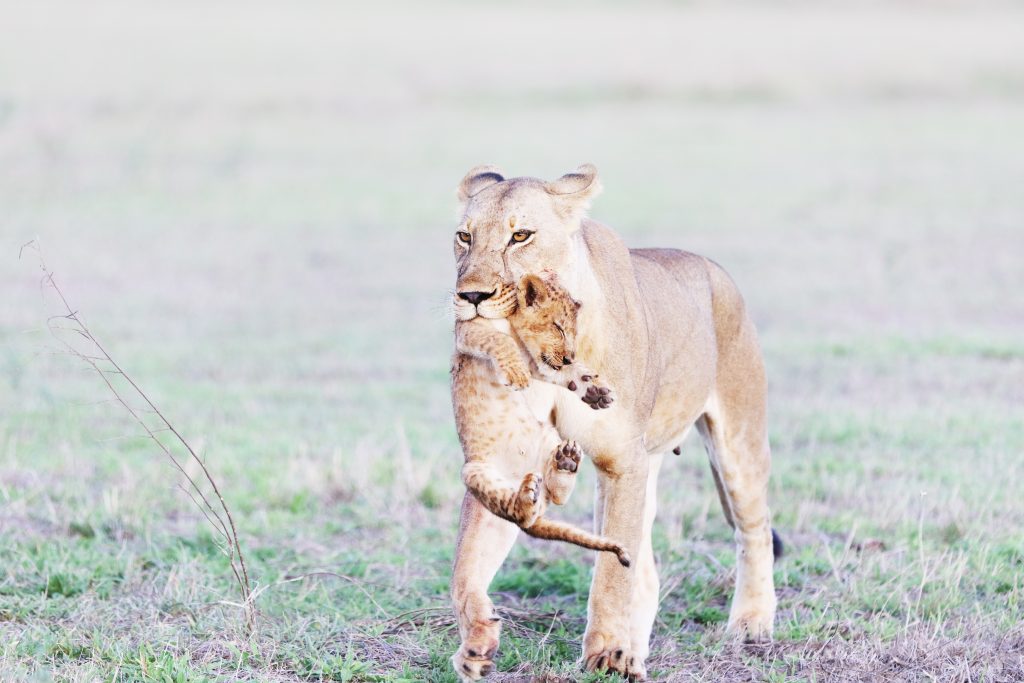 Some of the other activities, like boating, will take you to isolated islands in the Rufiji River. Walk amongst the wildlife on foot during a walking safari. This reserve is not for the faint hearted but it can be breathe taking and cruel all in one. It is a destination of the future. For now it remains a quiet corner of a more busy East Africa. 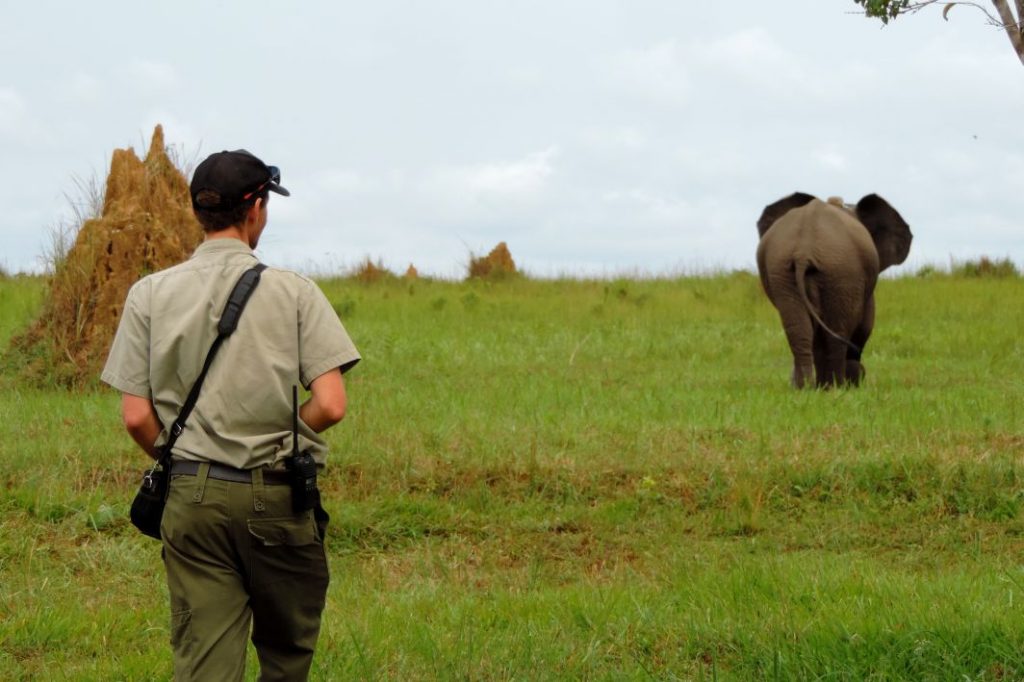 What ever you may be thinking about these wild and wonderful places they are not easy to access. Chartered flights are the norm. Simply traversing the rain forests can be difficult let alone finding the Gorillas. Wildlife within The Selous Game Reserve are wild and therefore can ne shy of noisy vehicles. But isn’t it just for that reason that these places draw us in. They ignite the fire of curiosity within us. Finding those times of old where wild is still raw.

The added bonus is that they are places that are protecting the environment and the whole eco system. We are so often told that it is your dream trip and everything must be perfect. In these places you will get stuck. You may have to push your own physical strength to the limit as you wade through rivers or swamps. You may have to buckle down the hatches as a huge storm approaches and the lightening lights up the horizon.

Up for trying something different? We could not recommend better places to see on the planet than these two hidden gems. 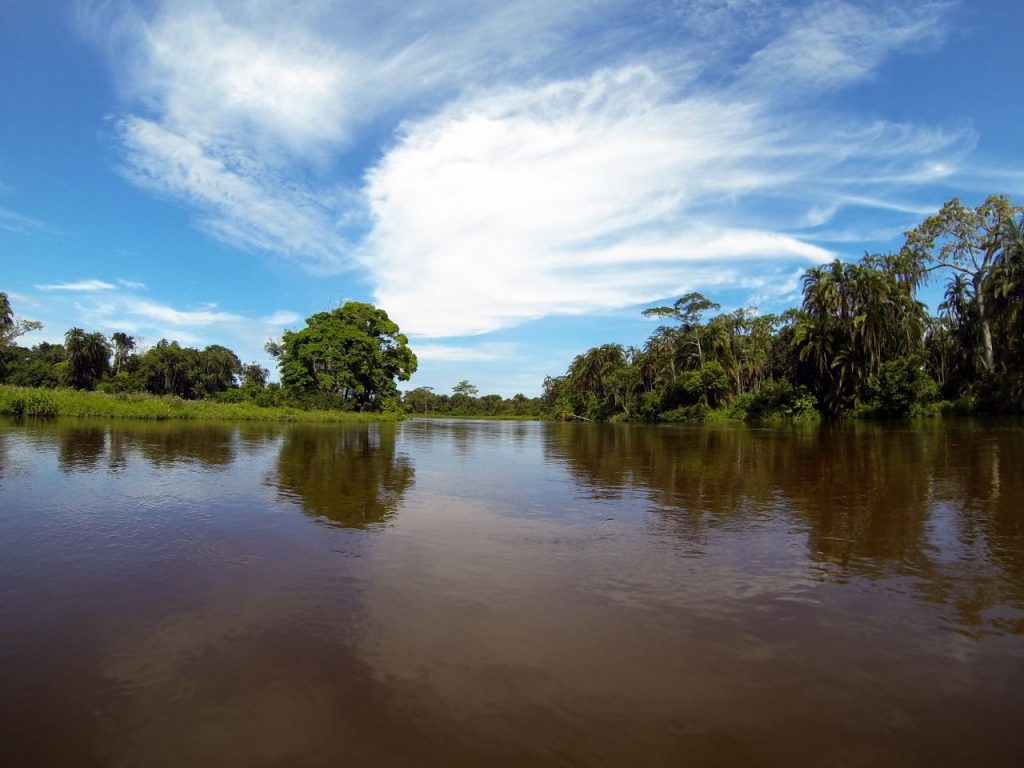